Once upon a time there was a king. This king declared all over his country: “Anyone who tells such a lie that I say it is a lie, I will give them half of my kingdom.”

There came a shepherd and said: “Your majesty, my father had a cane and he could reach the stars in the sky with it.”

“There may be such a thing”, answered the king, “My grandfather had a pipe so long that he put one end in his mouth and lit it with the sun.”

The liar went out puzzled.

There came a tailor and said: “I am sorry for being late, my king, I was to come earlier. It rained a lot yesterday, lightning struck, the sky was ripped up, I had to go and mend it.”

“Well, good of you”, said the king, “But you didn’t mend it well. It rained a little this morning.”

This one went out too.

There came in a poor peasant with a pan under his arm.

“You owe me a pan full of gold, I have come for it”

“A pan full of gold?”, the king got surprised, “You are telling a lie. I don’t owe you any gold.”

“If I am telling a lie, then give me half of your kingdom”

“No, no, you are telling the truth”, the king changed his word.

“If I am telling the truth, give me a pan full of gold”

The new year in Canada

Go to the shop 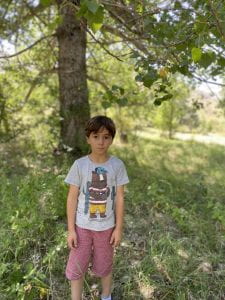